When I signed on with PALS in 2016, I knew I had an opportunity to serve in a unique way. As a Citation owner, I was one of very few PALS pilots with such a capable aircraft. The majority of pilots on the PALS roster fly small single-engine pistons, which is perfectly fine for most flight requests. A typical flight for those pilots ranges between 200-300 miles and carries one or two passengers—an easy assignment for the Cessna, Piper and Cirrus drivers.

But the need to access lifesaving care knows no limit. Quite often, PALS receives requests that go beyond the normal capabilities of those volunteer pilots and their aircraft. These are flights of longer distances, heavier payload, or other special needs. For most of the piston pilots, these requests are simply out. For the staff, it might mean finding multiple pilots to complete one flight, and coordinating details for multiple legs—no small feat. For the patient, it could mean a switch between aircraft or a higher probability the flight might cancel—not exactly ideal. In some cases, it may mean having to say ‘no’ to a flight request altogether.

But PALS is not an organization that likes to say ‘no’. They are continually assessing the need and looking for more opportunities to say ‘yes’ to people who require help. Part of that means looking to pilots with more capable aircraft to call on for those flights that push the boundaries. 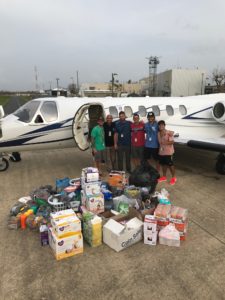 I asked the Mission Coordinators to single out the most demanding missions for me and my 560, simply because I have the training and equipment, and can handle all the weather, range, and lift requirements that two, three, or even four legs in a small piston might not be able to take on.

What I learned is that there is no shortage of flights for planes like mine. Opportunities with PALS include medical missions, compassionate flights for veterans, and also disaster relief.

My first flight was a medical mission to transport an eight-year-old burn victim and her family from their home in New York to Shriner’s Hospital for Children in Cincinnati so the girl could undergo treatment there.

I have to tell you that transporting veterans, who have given so much of their lives and, in these cases, their bodies, to serve our country is such a fulfilling way to use my passion and love for flying.

Josh C. served with the US Army 3rd Infantry Division. He was hit by an IED and lost his left leg and part of his right. His sweet wife, Holly, and daughter, Aubrey, accompanied him to the retreat.

Aubrey H. served with the US Air Force with a unit providing security for our base at Bagram, Afghanistan. He was hit by a IED and lost his left leg. His lovely wife, Jasmine, and son, Theron, came with him up to Maine.

We all know every time we fly how capable, comfortable, and safe these airplanes are, and so being able to take these six people and all their gear from Concord, NC to Augusta, ME was a perfect mission. One that might not have been so easily accomplished otherwise. 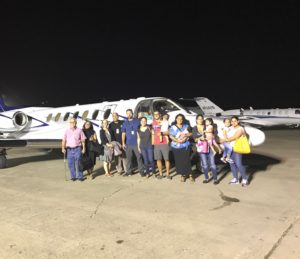 As you might have seen in the press, PALS has also allocated flights to disaster relief. I personally flew 22 hours to Puerto Rico and Dominica hauling critical supplies to ATC in San Juan. (Yes, I had to take food and supplies to our FAA employees who were without main generator power and running the TRACON on emergency backup power and minimal food and water). PALS flew hundreds of missions in support of relief efforts for the three hurricanes that battered us last year, many of which simply could not have been accomplished in less capable aircraft.

There are a bunch of volunteer pilot organizations out there that are helping people, but for owners and pilots of business jets who want to work with an organization that values your time and contribution while helping others, PALS is a great way to do it.

PALS takes a more “institutional” approach to charity flying than a lot of other volunteer pilot organizations. They arrange ground transportation, provide mission coordination, and have an intuitive web interface enabling pilots to quickly and easily see what missions are available and who needs help. The PALS staff is

amazing and works very hard (and often very long hours) to make all the little details in the background happen while the pilot can get on with the flying part of the mission. It really is a fantastic organization.

PALS is always looking for qualified pilots, but if you are one of those lucky enough to own and operate a business jet, I especially implore you to contact PALS to see how you can help. Or contact our PALS Pilot Coordinators who can put you in touch with me – I would be happy to talk about my own experiences as a pilot as well as any organizational questions you might have.

Our airplanes can really do so much for people in need. 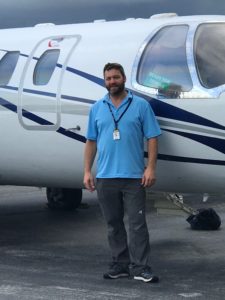 Paul Weismann has an FAA ATP rating with approximately 2,500 hours and enjoys flying his Cessna Citation V for PALS, on business, and with his family. He also serves on the PALS Board of Directors.

When he’s not flying PALS missions, Paul is an investor based in Westport, Connecticut, where he lives with his wife and three boys. While running a family office fund, Paul has invested across many disciplines and geographies, most recently in real estate. Paul is also interested in special situation credit, small cap private equity and the public equity market. Paul received his BA from Georgetown University and his MBA from Columbia University.