Flying the PROTE – No Training, No Gaining

Hey you, pilot!  Feeling a little light headed?  Nah, everything is hunky-dory . . . hunky-duh . . . huny . . . hmmm.  Sure, a little shortness of breath, but you’ve been sitting for a while and you’re not as young as you used to be, so it’s probably normal.  And the rapid heart rate–just your imagination.  Good thing you never smoked (except every now and then–socially—whatever).  Fingernails seem a little blue, but maybe it’s the dwindling light.  You’re at about–what was that altitude again?  You glance with blinkered obliviousness at the pulse oximeter prudently attached to your finger – it reads 68%.  That’s a passing grade, isn’t it?  Oh, and the tasks you started to complete–simple enough to be sure–but, you know, in your current state of detachment you just don’t feel like doing them.  Could if you wanted to, though.  Odd how gray and narrowly focused the world has become.  But you’re just not interested, anymore, 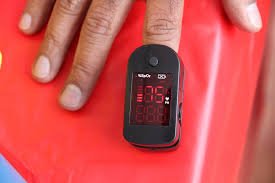 By now, dear reader, you probably recognize the symptoms of hypoxia overtaking the pilot.  Is he or she doomed, you might ask?  Well, mercifully, no.  You see, our pilot is (more or less) comfortably ensconced in a Portable Reduced Oxygen Training Enclosure (PROTE) and in a few seconds, if he or she does not take any remedial action, a helpful representative of the FAA’s Civil Aerospace Medical Institute (CAMI) will assist the pilot in donning an oxygen mask.  After that, the hypoxia symptoms will disappear in a matter of seconds, but the queasiness might linger for a while.

I know this because last May at the FAA’s Mike Monroney Aeronautical Center in Oklahoma City, that pilot was me.

A lot has been written about hypoxia, and everyone who has passed the oral portion of a pilot certification exam can recite the cause–a lack of sufficient oxygen in the blood and tissues caused by a decrease in the partial pressure of oxygen which results from increasing altitude.  That is to say, as altitude increases the relative percentage of oxygen remains the same but the partial pressure (i.e., the distance between molecules) becomes greater, resulting in less oxygen being absorbed by the body. 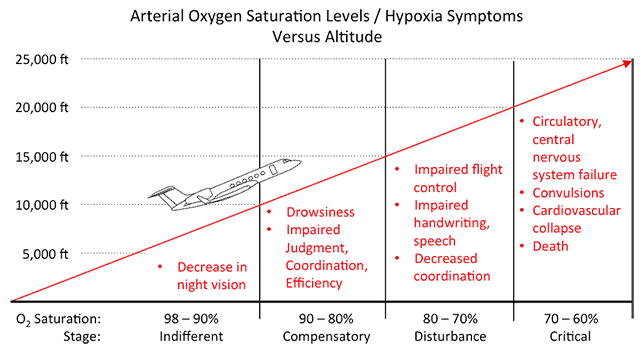 Most pilots can name several indicative symptoms of hypoxia.  But unless you have experienced it in a controlled environment, you probably can’t identify the aspects that are peculiar to your body.  Hypoxia affects each of us in different ways–both the specific symptoms and their order of appearance can differ from person to person.  The bottom line, however, is the same for everybody–a loss of cognitive ability akin to being drunk (or so I’m told) and a mild sense of euphoria which makes everything seem alright–and ultimately, if left uncorrected, it leads to death.

The FAA does not require hypoxia training, but it is strongly recommended (see, AC 61-107B).  And in spite of what you may think, you don’t have to be an instrument pilot or fly at altitudes where oxygen is required in order to benefit from the experience.

You also don’t have to travel to Oklahoma (where the wind really does come “sweeping down the plain”) to participate in the training.  The FAA sends the PROTE and its staff around the country to offer a convenient opportunity for local pilots to intimately experience the impact of hypoxia.

The good news for you is that Patient AirLift Services (PALS) will be hosting the PROTE right here in the Northeast this May.

In order to spare you an excruciating technical explanation of how the PROTE works, let me just say that it realistically approximates the oxygen deprivation a pilot would experience at 25,000 feet without supplemental oxygen.  At the beginning of the training session, the CAMI team provides a safety briefing as well as an in-depth explanation of what to expect.  Then you are given a form containing some very simple cognitive problems that you will be asked to solve and boxes in which you can record your personal hypoxia symptoms at designated intervals.  A pulse oximeter is placed on your finger to allow you to monitor your blood oxygen level as well as your pulse.  The atmosphere in the PROTE is then modified to the training altitude.  When you experience three symptoms of hypoxia or when you begin to feel uncomfortably impaired, you simply reach for your oxygen mask and the invigorating flow of O2 makes the world seem right again.  The “flight” lasts about five minutes, and virtually everyone is on oxygen by the time it ends. 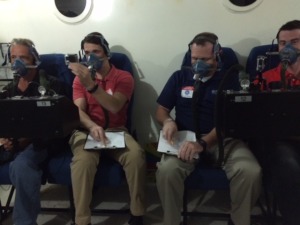 One of the most entertaining aspects of a PROTE session is watching your fellow pilots.  The object of the exercise is to recognize and make note of symptoms heralding the onset of hypoxia.  It’s sort of like stall/spin awareness training.  But some intrepid souls don’t get the message and continue the exercise to a point where third-party intervention is required.  When this happens, a member of the CAMI team approaches what he or she believes to be an impaired pilot and asks some simple questions.  If the answers are not promptly forthcoming (and they almost never are), the PROTE monitor puts an oxygen mask on the pilot and, after a few seconds, asks whether he or she remembers the questions.  In the very few cases requiring intervention that I witnessed, the pilot could recall neither the questions nor the answers.  The PROTE offers each of us an opportunity to safely focus on subtle signs of hypoxia; it is a mistake to view it as a test of strength or stamina.

Michael P. Peck is a retired partner in the New York office of Sidley Austin LLP, where he practiced for 36 years in the area of asset-backed finance (including aircraft finance). He is also an Adjunct Assistant Professor at Embry-Riddle Aeronautical University where he teaches courses in aviation law and is the Chair of the Aviation Finance Subcommittee of the Association of the Bar of The City of New York. Mr. Peck is a graduate of the Institute of Air and Space Law at McGill University, has JD and MBA degrees from Vanderbilt University, an MA degree from Duke University and a BA degree from Washington & Lee University.  He holds a commercial pilot’s certificate with instrument rating and is a certified flight instructor, instrument instructor and advanced ground instructor.